How the Bank of England's inflation makes you poorer

Find out how the Bank of England's inflation makes you poorer

How inflation makes you poorer

Many people think inflation, and hence ever increasing prices, is natural because that is all they have ever experienced. However, price deflation is the natural tendency for many things people consume, and inflation is the result of the currency being debased by the Bank of England.

Despite inflation having been proven to be one of the biggest threats to economies, the UK government mandates that the Bank of England create 2% consumer price inflation every year. Even though the Bank of England regularly exceeds this level, and creates a lot higher inflation and even higher real inflation, creating just 2% inflation requires confiscating a much higher percentage of the purchasing power of the currency.

When money is honest, as consumables get cheaper to produce over time due to advances in technology and production, efficiency savings and economies of scale, people are able to buy more with their money and achieve a higher standard of living. As people's skills improve to complement the new technology, they are able to earn higher wages, and because the money is honest, earn more in real terms. Therefore, people are able to benefit from the fruits of their labour and share in the prosperity they help generate with honest money.

Today, the Bank of England has to make sure it debases the currency enough to confiscate any prosperity a worker would otherwise have been able to share in by making sure that everything is more expensive for the people of the United Kingdom every year.

To illustrate this, if through efficiency savings a car manufacturer was able to produce cars 2% cheaper this year and it wanted to pass on those savings to the consumer to take advantage of economies of scale the Bank of England would have to debase the currency even more this year to ensure cars were still 2% more expensive than the previous year.

In fact, the Bank of England is an expert currency debaser and has caused car prices to rise 2.5% per year on average since the introduction of financial repression in 2009, representing a 34% increase over the period, as shown in the chart below. 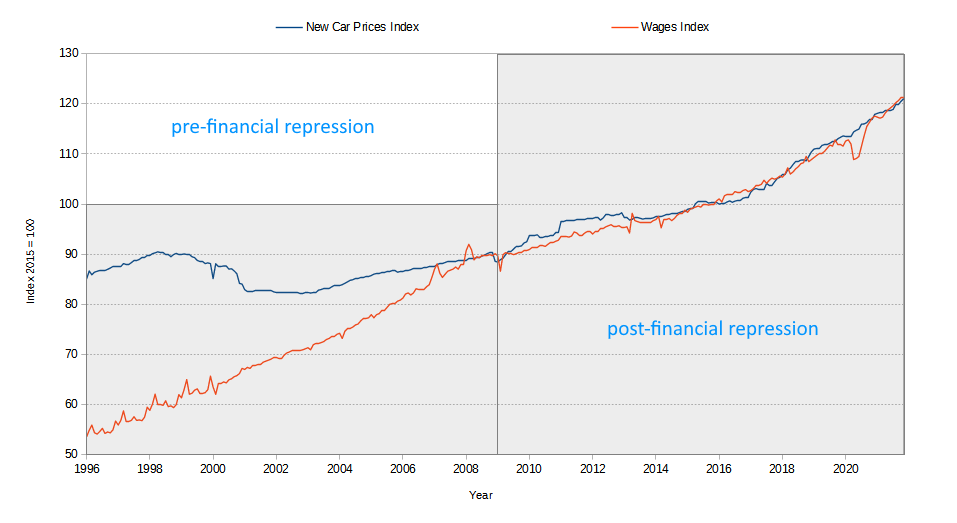 New Car Prices Index vs Wages Index, 1996 to 2021. Data from the Office for National Statistics for Consumer Prices and Wages

Even though cars and wages are rising in nominal terms as seen in the chart above, this is just the effect of currency debasement. In real terms, cars are becoming cheaper and wages are falling.

Any attempt to earn more through self-advancement at work is automatically met with purchasing power confiscation by the Bank of England, so it isn't possible for the nation as a whole to achieve a higher standard of living through higher earnings. In fact, the people of the United Kingdom are pitched against each other to compete for earnings due to purchasing power confiscation.

To illustrate this, for a brief period from 1999 to 2001, wages rose as car prices fell, indicative of an improvement in the standard of living of the people of the United Kingdom (should the index be representative of all prices). However, this was short-lived as the Bank of England ramped up inflation again ensuring no one could benefit from falling car prices.

Inflation affects all prices, and because inflation benefits the wealthiest and hurts the poorest, it follows that the poorest are getting poorer due to inflation. In other words, rather than a rising tide lifting all boats, inflation — the confiscation of purchasing power — ensures that the boats of the wealthiest rise because those of the poorest fall.