How the Bank of England creates housing booms and busts

The housing boom and bust

One of the pastimes of the Bank of England is wreaking havoc in the housing market by creating booms and busts. The chart below shows the history of these going back to the 1970s. These are generally named after the chancellors of the time, although all are caused by the Bank of England, sometimes with the help of the UK government. Regions A,B,C and D on the chart are as follows: 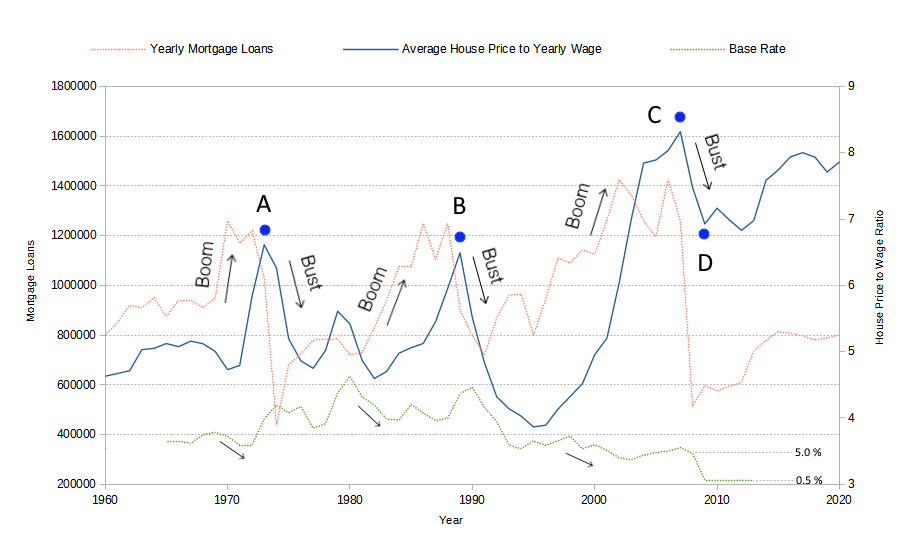 Boom and Bust Cycles, 1960 - 2020. Wage, house price and loan data from the Office for National Statistics, Nationwide Building Society, Building Society Association, Mark Boleat and the Centre for Business Research. Mortgage loans are for house purchases only and do not include remortgages or equity release.

The Bank of England starts the boom by easing credit conditions; that is, by lowering its base rate to reduce borrowing costs. This allows people that would otherwise have not been able to — for example, because they hadn't yet saved enough of a deposit or hadn't yet got that promotion and pay rise at work — to start borrowing to buy a house, or to buy a more expensive house. As a result mortgage loan approvals for house purchases rise (as seen in the chart above). At this early stage in the boom, the prices of houses have not yet started to rise.

Meanwhile, because increased lending always increases the money supply, and there is nowhere for the money to go except back into the housing market, the circle of house price inflation is started or accelerated.

As banks become relaxed about lending higher multiples of a person's income, they continue to lend, providing the fuel for the circle of house price inflation. Eventually though, even less creditworthy borrowers are exhausted and the mortgage plateau cannot be maintained at these artificial levels.

Meanwhile, the Bank of England, realising the excess money supply it caused is going to cause consumer price inflation, starts to raise its base rate.

The rising of the Bank of England base rate signals tighter lending conditions, and the banks cannot continue to lend at higher multiples of a person's income with base rates rising. Mortgage lending rapidly drops along with house prices, and a rise in mortgage loan defaults and house repossessions is seen.

Housing booms and busts cause considerable economic damage and economic pain to individuals, businesses and sometimes to the banking system as was the case in 2008. House price falls were halted in 2009 by the Bank of England dropping its base rate to the lowest ever seen in its history as the bank ushered in a new era of financial repression, ensuring that the prudent and the poorest in society would pay for its incompetence, mistakes and failures.