How the Bank of England creates the inflation circle

Discover how the Bank of England creates the inflation circle

A good example of how the Bank of England creates the inflation circle, also referred to as the viscous circle of inflation, is in house price inflation. Because most of the money used to bid up house prices is borrowed into existence and not earned, and does not create future real growth or increased economic activity, this new money is inflationary. The chart below shows that most houses are purchased with a mortgage, and most transactions involve recycling existing housing stock rather than buying new housing. 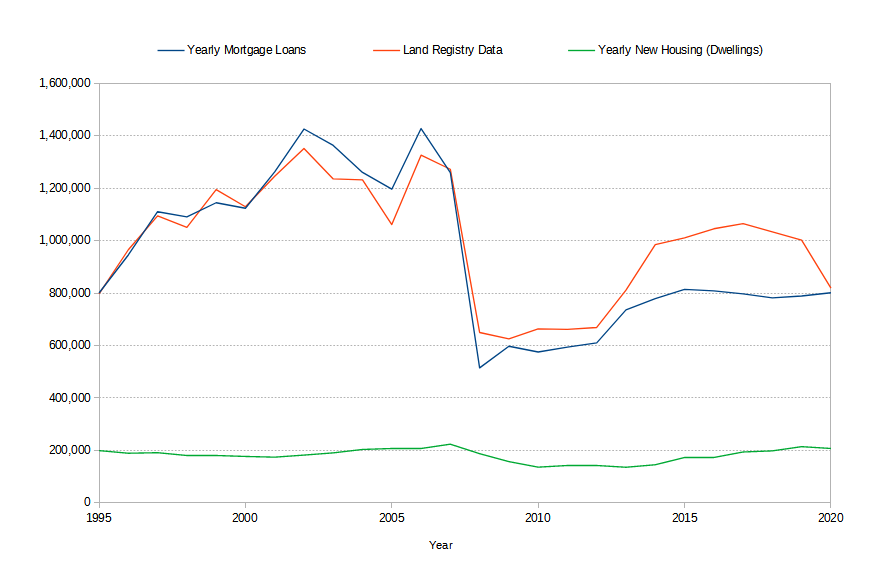 Yearly Mortgage Loan Approvals vs Land Registry Data and New Dwellings, 1995 to 2020. Data from the Building Society Association, Land Registry and the Office for National Statistic

When a house builder sells a house, the freshly created money they receive — after paying back loans, paying off expenses and paying out dividends — is available to either save as monetary capital or to buy land and raw materials (non-monetary capital). Since there is little incentive to save given the Bank of England's financial repression, the money goes into buying land and materials, especially land. Since every house builder is in the same situation, and they all have increased funds available, they all have no choice in bidding up prices.

The house seller is in a similar situation. Either the money received is going to be saved or it is going to be spent. Since there is little incentive to save, the money is likely to find its way back into housing. Most sellers will be moving up 'the ladder', hence taking out new loans using the money as a deposit. Few would opt to rent — or risk renting if they intended to buy later — due to the currency risk the Bank of England has created.

It's not just in housing

This happens not just in housing, but in all areas where lending expands without an expansion of economic activity. Fortuitously, from a broad inflation standpoint, a significant portion of the UK population has been priced out of being able to buy a house by the Bank of England and the UK government, so only a subset of the population are able to take part in the circle of rising house prices.

There is no free lunch

It is important to remember that the circle of house price inflation comes at a great cost. To keep interest rates suppressed, and hence keep up the relentless currency debasement, the Bank of England has to keep buying UK government and corporate bonds with counterfeit money. This encourages and requires the government to keep borrowing, getting the country deeper and deeper into debt as shown in the chart below. The current public sector debt as of November 2021 is £2.3 trillion, which is around £72,000 per taxpayer. 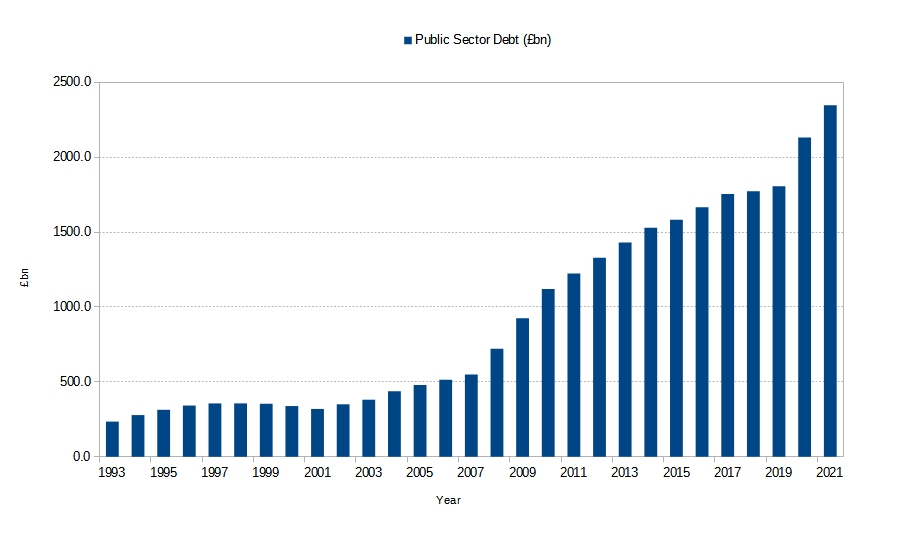 Data from the Public Sector Debt, 1993 to 2021. Office for National Statistics.