How money is created

Find out how money is created

How money is created

Money is created when people and businesses come together to borrow and save in the banking system. To best see how this works, imagine you own a bank, and a creditworthy customer applies for a mortgage loan of £199,000 to buy a house. Your fee is £1,000 for setting up the loan, which will be bundled in with the mortgage loan.

The image below illustrates how you would set up this transaction at your bank. 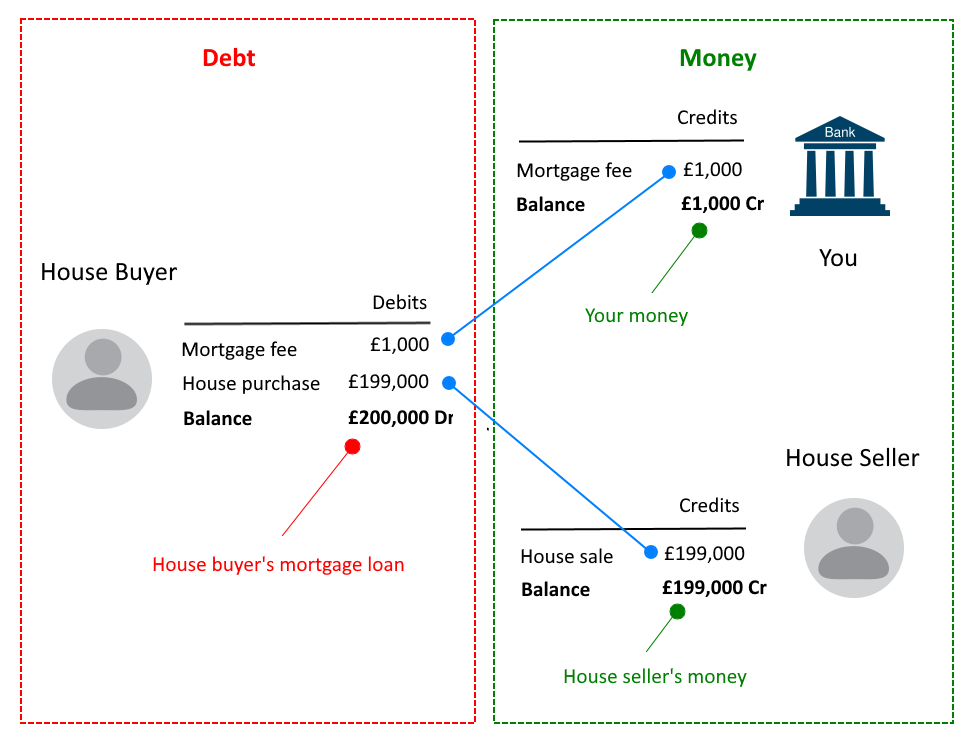 Example of a mortgage loan origination transaction at a bank.

You have just created new money

After setting up this transaction, you have created £200,000 of new money. This is because fiat money exists only on ledgers at banks, hence the reason it is also referred to as ledger money or money of account. You have created debit and credit entries on the accounts of the house buyer, the house seller and yours. These account entries add up to zero because

Therefore, you haven't created any wealth or any value by carrying out these ledger entries. Creating money does not create wealth — something you may have heard many times before.

You have to have savers

As mentioned above, money is created when people and businesses come together to borrow and save. It is clear who the borrower is (the house buyer), but who is the saver? Well, that is primarily the house seller because they have a new deposit in their account for the house they sold. You are a saver too because you have a deposit for the mortgage fee. Even if you and the house seller intended to spend the money, the money would remain in the banking system until it were used to pay off a loan.

Money is an IOU

Your reputation as a bank

This is where your role comes in as a bank. You take on the liability of the house seller's deposit as well as the debt of the house buyer, which to you is an interest-bearing asset. So what would have been one IOU now becomes two: one between the house buyer and you, and the other between you and the house seller. This is just another way of saying that money has counterparty risk, which is why deposits at banks are not risk free.

The above example is accurate but is not the whole story. You as a bank also must have reserves (your own money) and must have a reliable reputation in order to be able to send and receive customer deposits to and from other banks.

Someone's money is someone else's debt

As you may have worked out, every penny and every pound (£) that someone has in their bank account is owed by someone else in the banking system. And if all bank loans were paid back, all money would disappear. However, there could still be debts owed between people and businesses outside the banking system. In otherwords, there is generally always more debt owed than money in circulation.